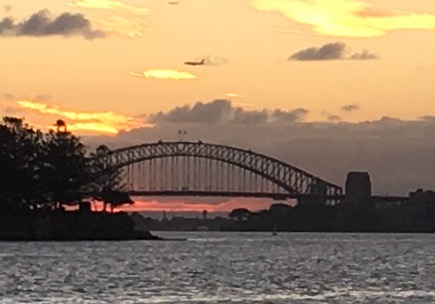 Posted by Andrew Latimer in Triplog

Shy Alba arrived at Sydney Heads early yesterday morning. All as planned and without incident I am happy to report.

However the crew have been silent. Maybe catching up on sleep! After some prodding here is today’s log entry direct from skipper Laurence.

“Departing Franklin on a full tide at 8 pm , sad looks from girls and dogs on the jetty we headed around the channel to Kettering for fuel.

The fuel dock was very tight and windy so kept going.

Anything not already stowed was re-lashed

Around the corner into Port Arthur were we anchored in Safety Cove under the shadow of Mount Arthur.

This leg around Tasman Island , into Monroe’s bight then out around The Hippolites would be our most promising for big fish.

So into the Mercury Passage to head for Triabunna for fuel

The fuel truck was at the cargo wharf at seven as arranged so we were under way by 8am up the coast.

The weather reports were a little ominous so we pulled into Wineglass Bay for phone reception and an update on Meteye.

This confirmed it was lay day time which we spent fishing and preparing for the trip across Bass Straight.

A good fleet was in the bay with us

Visiting yachts returning north, around Tasmania fleet on last legs of their trip

Big motor boats up from Hobart

This have good stability and more drive

Seas gradually built over the 98 hr Passage to be lumpy

We came in close to Jervis Bay and passed inshore of the John Young Banks with Dallas using his local knowledge to save some heavy current beating.

Up the coast and dodged busy shipping

Dropped Dallas of at Middle Harbour Yacht Club and proceeded down the harbour to Rose Bay where we have a great anchorage close to family and transport.

To be anchored with Sydney Harbour bridge in front, superyachts and seaplanes all around is very surreal after windy Wineglass Bay.

Then three days ” into the dark”, as Phil put it, to emerge in sparkling, busy Sydney from the Bass Straight wormhole.

Shy Alba as a boat performed very well and did not miss a beat.

New electronics performed well and give a lot of new information to navigate with.

As ever we ran paper charts as well with regular log entries.

We ran the latest software updates to or Raymarine gear and benefitted from some great new features in the gear we already have.

The rudder indicator bar pops up on the plotter when you turn to standby so you can settle in on the wheel knowing we’re the rudder is – handy!

AIS was great in the shipping channel to see who that big black shape blocking out all the coastal lights is.

Even the stereo can be controlled from the Raymarine a98 which saves peering at the main unit.

Lighting reviews have given a good balance between cabin and night running lights.

There you have it. A great end to a great voyage. Thanks to Laurence, Philip and Dallas for bringing Shy Alba safely to Sydney. 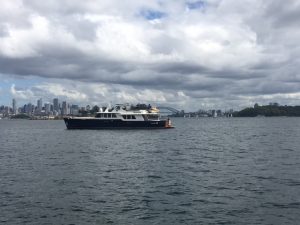 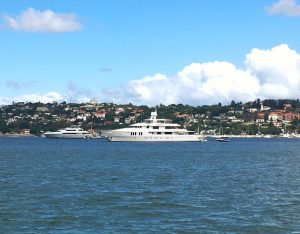